So much has happened since prom night. Let me catch you up. First off, much to my utter dismay, no romantic connection formed between Autumn and George. Maybe it is all for the best though. Autumn will be going to college earlier than expected (she is just that smart). She has her pick of any top university that she wants to attend. And it is a known fact that long distance relationships don’t work.

On the plus side, Autumn & George seem to have become the best of friends. Autumn, George, and I have known each other since we were all toddlers growing up together. For the most part though, George was my friend while Autumn enjoyed playing by herself. Autumn has always been very shy and had a hard time making friends. She had been too shy to eat lunch with me and my entourage. So, I’m glad that she now has a friend in George. He has taken over my job of helping Autumn document her findings over the telescope.

I ​am ​happy to report that I haven’t seen Becca since prom night. Can you imagine how humiliated she must feel about how insane she acted when she saw me dancing with the Castor twins? She went bat shit crazy on me, and is probably too mortified to show her face out in public.

That, and I am sure that Becca is heartbroken beyond repair because I dumped her so publicly. I didn’t want to dump her in front of the entire school, but in the end she really left me no choice. Seriously though, what did she expect from me? Becca knew that we were never serious. Or exclusive. I can’t help it if she fell for me. It is not my fault that I am so devastatingly handsome and charming. Becca knew the risks. Sometimes when you play with fire, you get burned. 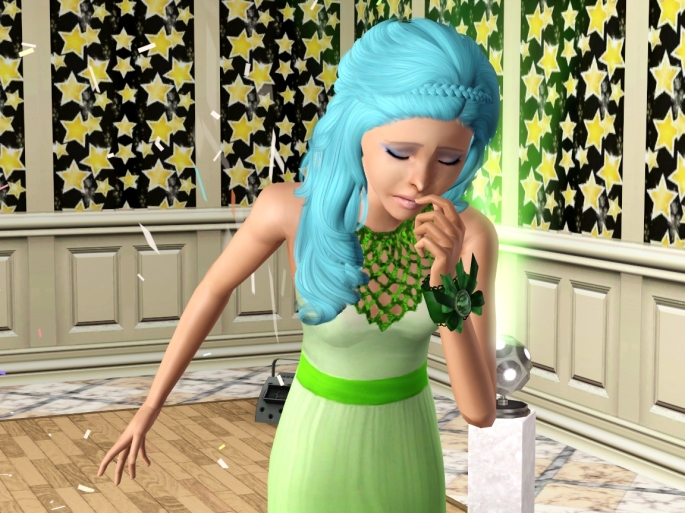 I, on the other hand, have been having the time of my life! Mandy & Brandy Castor sure know how to make a guy feel special. And boy, do I feel special. So much so that I completely forgot about the university entrance exam that I was scheduled to complete.

It is something that every high school student has to go though. We have to meet with one of our school counselors so they can administer some sort of test looking at all of our skills, our GPA, and our personality traits. The test is suppose to determine what area of study would be best when we enroll in the university of our choosing, and sets up any scholarships if needed. I couldn’t care less about missing the exam, because I have no interest in attending university. But Mom was not going to be so forgiving if she ever found out.

“How did the test go?” Mom asked me. She cornered me in the living room, and wouldn’t let me go.

I didn’t know how to answer her question. I didn’t want to lie to my mother, but I didn’t want to start a fight with her either. And I knew that if I told her I missed the test it would start World War III.

“I guess I don’t have to ask which part of the test you excelled at the most.” Mom flashed the same ridiculous smile she does every time she thinks she is being clever. She meant that I was a shoe-in for the music program.

“Nope, you sure don’t” I said quickly, hoping that would be the end of the conversation. I was not so lucky.

“Lincoln James Charming,” I could tell Mom was super pissed because she very rarely uses my full name. “I know for a fact that you missed the exam. Your counselor called. Why didn’t you take the university exam? Why do you feel like you can lie to me?”

I didn’t know how to answer those questions either. What is it with parents asking questions that they already know the answer to?!

“If you knew that I didn’t take the stupid test then why did you ask me about it?” I was trying to beat Mom at her own game.

“I was giving to a chance to explain yourself.” Mom responded, “Are you sick, nervous, anxious about the results? Whatever it is you can talk to me about it.”

“No,” I was starting to seriously get offended by my mom’s constant interference in my life. She is always doing this to me. Always putting her nose into my business when she just needs to butt out! “Why don’t you just leave me alone? Just because you are crazy and have to see a therapist, doesn’t mean that I am messed up like you are!”

Let’s clear something up right now. I don’t take it back, and I don’t regret what I said to Mom. I know that she talks to a therapist once a week. She has been going for as long as I can remember. But seeing a therapist doesn’t mean that ​she has the right to psychoanalyze ​me. What I do regret is saying it loud enough for my dad to hear. He came charging out of the kitchen, faster than a charging bull, and he was just as pissed off.

“Do not speak to your mother that way.” Dad reprimanded me.

I don’t know if he was trying to scare me or what, but I was not backing down without a fight! “I don’t want to go to any stupid university, okay!!” I finally came clean. “I want to move to Bridgeport and be a Rock Star just like Leo Capra!”

For the next few moments both my parents stared at me in silence. Trying to comprehend what I was saying. They both looked at me as if I was speaking a foreign language. Like me being a world famous Rock Star is so hard for them to fucking believe. Then my parents recovered, and all hell broke loose. 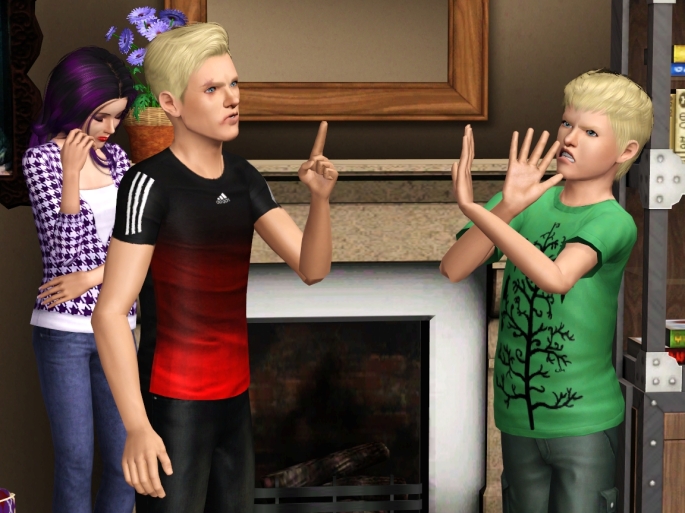 “You think that you will just step foot off the plane, and what?” Mom and Dad questioned me like it was the Spanish Inquisition, “someone is going to run up to you and hand you a contract? Life doesn’t work that way. You need to go to university to hone your skills. If you want to be a rock star, then of course we support that. But why not go to university to train to be the best musician you can be?”

Mom thinks that she is so smart. That just because she went to college everyone has to. Well, I had a comeback for her stupid logic. “Not everyone ​has to go to university to be successful. What about Grandpa Ryan? He became a professional racer right out of high school.”

“Your Grandfather was recruited after high school. He also trained everyday and worked very hard to become as successful as he was. And I’m sure this Leon Capra is also very talented and works very hard at what he does as well.” Mom tried her best to calm down, but she doesn’t understand how dumb she is sounding right now.

Mom can be so stupid, she has no idea what she is talking about. So, I had to put her, and Dad, in their place by saying, “First off, it’s ​Leo​ Capra, and he is the greatest musician of all time. And his band, Accidental Therapy, is the best band of all time! I am going to Bridgeport to meet him, and be like his protégé. I will be the opening act when the band is on tour. And Leo will introduce me to all of the important people in the music business. I’ll be famous, you’ll see!” 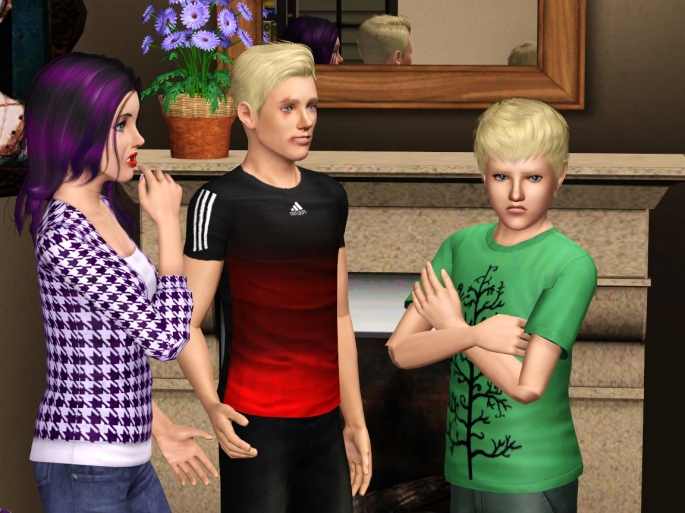 “That all sounds fine, in theory.” Dad was not as mad as he was before, but he was still pretty upset at me. At least he stopped yelling. “But how do you plan on making that happen? When you are at the university you will make all sorts of connections. The University of Roaring Heights has a great music program. Why don’t you just at least talk to their admissions rep?”

The truth was I didn’t have the slightest idea how to get a meeting with Leo Capra or anyone associated with his band. It’s not like their phone number is listed. I couldn’t just Google it. But there was no way in hell I was going to tell my parents that.

“Grandpa believed in me. He always told me to follow my dreams.” mentioning Grandpa over and over again was a cheap shot to try to get Mom more upset. I figured that if I mention him it will distract her from asking me any more questions that I didn’t have the answer to. It didn’t totally work. Mentioning Grandpa made Mom sad, which made Dad mad at me again.

“Your grandfather set aside a college fund for you. He started it the minute you and Autumn were born. He has an account for Willow as well. Why would he do that if he didn’t want you to go to a good school to get a good education?”

I had heard enough. My mind was already made up. I am going to Bridgeport. I am going to be a famous rock star. I am going to have millions of adoring fans. And I will NOT let anyone stand in my way. “I don’t care what you say. And I am not going to stand here and listen to your stupid bullshit.”

“Do NOT curse at us, Lincoln James Charming. You are grounded for a month!”

“I can’t wait until I become a young adult. And then I can do whatever the hell I want. And you can’t fucking stop me!”

“that is enough!  Go to your room and don’t come down until you can stop being a smart ass!!”

I was so pissed off I stormed up to my room stomping my feet and making as much noise as possible. I didn’t come down for dinner. And I sent Willow away when she brought me up some leftovers a few hours later. I was still mad as hell, and I couldn’t stand being in that house with those hypocrite parents of mine for a minute longer. As soon as everyone was asleep I snuck out my bedroom window. I wanted to go meet Mandy & Brandy so they can make me feel better. I was in the backyard about to make a break for it, when I heard Autumn asking me to stop.

“How did you know I was out here?” I questioned her although I already knew the answer. The psychic twin connection can come out of nowhere when you are not expecting it.

“Go back into the house and talk to them.” Autumn pleaded with me. “You know that Mom and Dad love you. They just want what they think is best for you.”

“There is no reasoning with them.” I wanted to shout, but I had to whisper to make sure no one else woke up. “I can’t be here anymore. I need out now.”

“That fight between the three of you got way out of hand. Just take the night to sleep on it and tomorrow you all will be calmer and you can talk to them then.”

24 thoughts on “Chapter 3.8 From Prom-tacular to Disaster”