Why can’t things ever stay the way that they are? Why do things have to change? Why do I have to be the one dealing with this? Why do bad things have to happen? It is not fair. It is complete bullshit!!

My life was going great. I had it all. Then out of the blue, it all changed.

That morning Grandpa Ryan and I ate our breakfast and talked about the day’s football game. I was so excited that I inhaled the apple pancakes in record time. The Gnomes were actually having a winning season, and our team had made it into the playoffs for the first time in I don’t know how many years. But the Bridgeport Buccaneers and their killer offence were going to be a challenge. Win or lose it was sure to be an enjoyable game.

And it was an exciting game. The Bucs took an early lead, but the Gnomes didn’t give up. The Bucs scored the first two touchdowns of the game, but the Gnomes answered with a touchdown of their own, and a field goal. Going in to the second half the Bucs were up 24-10. On their first possession of the 3rd quarter the Gnomes scored a touchdown bringing the score to 24-17. The teams then traded 3 and outs back and forth with the Bucs trying to take up as much time off of the clock as possible. The Gnomes did manage to score a field goal from 56 yards (Gramps and I were holding our breaths on that play). Going into the 4th quarter the score was 24-20.

The Bucs changed up their offensive line, which worked and resulted in another touchdown. Unfortunately for them they messed up their extra point kick, so the score became 30-20. The Bucs screwed up again with their return kick, and Gnomes receiver Jared Olbruck ran it in for a 82-yard touchdown. With minutes on the clock the Gnomes tried for an onside kick, but failed. The Bucs tried to run the clock out, but the Gnomes weren’t giving up. On 3rd down their QB tried to throw the ball quickly before getting sacked. But the Bucs player missed the ball! For a few seconds the ball was loose on the field. In that moment my heart stopped. It started back up again as Gnome player Marcus Stewart recovered the fumble and ran 56 yards to score a touchdown as the game clock ran to zero. The Twinbrook Gnomes won 30-34!!

I was so excited I jumped out of my seat and cheered! I had just witnessed history. The Gnomes were going to the conference championship game for the first time in almost 20 years, which was longer than I have been alive!! I expected Grandpa to be right next to me cheering as loudly as I was. I looked over, and that’s when I saw him laying on the floor. He was clutching his chest.

“Hey Gramps, was the game to much for you?” I joked.

“Get….help,” he managed to say. It took all of his energy to talk. Without saying another word I ran into the house to find Mom.

Mom was in the kitchen helping Willow with her science project. Willow was creating a working model of our solar system and Mom was helping her glue on the stars.

“Come quick,” I shouted with tears filling my eyes.

Mom sensed my panic and rushed across the yard to my Grandparents’ house. Willow saw the panic in my eyes and immediately started to cry. Willow’s loud crying started our dogs barking. The noise brought Grandma Cindy in from the yard and Autumn from her upstairs bedroom. I tried to explain what had happened but between Willow’s crying, my crying, and the dog’s barking it was just a lot of noise.

What happened next is still a blur to me. I remember hearing the sirens of the ambulance. I remember Aunt June coming over to check on us while everyone was at the hospital. I remember her saying that everything will be alright. I remember hugging my two sisters as we all sobbed. I don’t remember how we made it upstairs to my room.

“Do you know what might make us feel better?” Autumn was the first one to speak. She was sitting on my bed with Willow on her lap. “Why don’t we all sing a song?”

I didn’t feel like singing. My voice was hoarse from shouting at the game and from crying over seeing Grandpa like that. My body was numb and I didn’t think that I could hold a guitar or play the piano.

“I think that is a great idea.” Aunt June tried to perk up our spirits.

I looked over at Autumn who was looking at me. Until that moment I never believed in the phenomenon called a Twin Connection. Sure Autumn and I were pretty close. And I loved her with all of my heart. But we never had that psychic connection that you read about with twins. But at that moment I knew exactly what she was thinking and what song she wanted me to play. Without saying a word I picked up my guitar and started to play.

“Someday,” Autumn joined in, “We’ll put it together and we’ll get it all done.”

“Someday,” next it was Aunt June’s turn to sing, “When your head is much lighter.”

“Someday, we’ll walk in the rays of a beautiful sun,” the three of us sang together, “someday when the world is much brighter.”

“RIGHT NOW!” Willow sang at the top of her lungs. Even Captain, our dog, joined in at the end.

It was so sweet and so funny that we all had to laugh. It was at that moment the lights flickered, my drumsticks fell, and my electric piano turned on. Until that moment I never believed in the supernatural either. 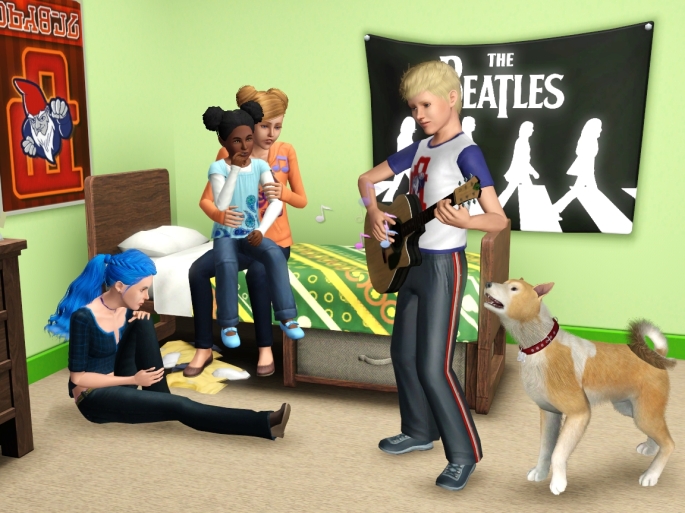 As if on queue Dad walked in the room. Aunt June left so Dad could talk to us in private. I knew what he was about to say, but that didn’t make hearing it any easier.

“Your Grandpa Ryan suffered a massive heart attack.” Dad spoke softly and quietly. I knew that saying it was just as hard as hearing the news. “The doctors did all that they could, but it was too late.”

“I should have ran faster.” My grief turned into regret. “I should have been paying more attention to him and not to that stupid game!”

“This isn’t your fault, Cowboy,” Dad hasn’t called me Cowboy since I was a kid. When I was around 7 years old I started to hate the nickname and insisted he stop saying it. But now it is exactly what I needed to hear. “You couldn’t have known that this was going to happen. And you did the right thing by quickly finding Mom.”

Autumn, still holding Willow on her lap, was comforting me, echoing Dad’s words of assurance. Even Captain nuzzled me lovingly. But they didn’t make me feel any better. There is a pit in my stomach and a hole in my heart. A hole that will remain there forever.

The day of Grandpa’s funeral was also one big blur. I just remember sitting in the church wondering how could this happen? Why did this have to happen?

Mom had asked me if I would play a song during the service. At first I said no. I wouldn’t be able to get through it. It would be too hard.   But after “talking” with Autumn I changed my mind. Again, we had our psychic twin connection thing. Without having to say a word she reminded me that Grandpa had been a huge fan of my music. He supported me, and encouraged me to pursue my dream of becoming a super famous rock star. I had told Mom & Grandma that I had changed my mind. That I would play a song for him. But sitting in the church, in that wooden pew, my stomach in knots over guilt, I changed my mind again.

My twin put her hand on my shoulder, gave me an encouraging smile. As I looked at Autumn I saw a bright light come through one of the windows. It shined brighter than any other light. I could have sworn that it was Grandpa smiling at me as well. I got up, grabbed my guitar, and began to play.

I had searched the internet for the perfect song to play that honored Grandpa, but nothing came up. Nothing seemed to fully express how much he meant to me. How much he meant to all of us. I was about to give up and tell Mom that I changed my mind again, but then I found it. It said exactly what I couldn’t say. It shows how much I loved him. How much I looked up to him. How grateful I was to have him as my grandfather.

“If the story’s told, only heaven knows,” I began to sing. “But his hat seemed to me like and old halo.”

“And though his wings, they were never seen.” I had a hard time getting the lyrics out. My voice cracked and I was off key. I wanted to run off, smash my guitar and drums and never sing again. I wanted to hide under a rock for the rest of my life. But I knew that wasn’t what Grandpa Ryan wanted for me.

“I thought that he walked on water.”

Rest in peace Grandpa Ryan. I love you, and miss you everyday. And to me, I thought that you walked on water. 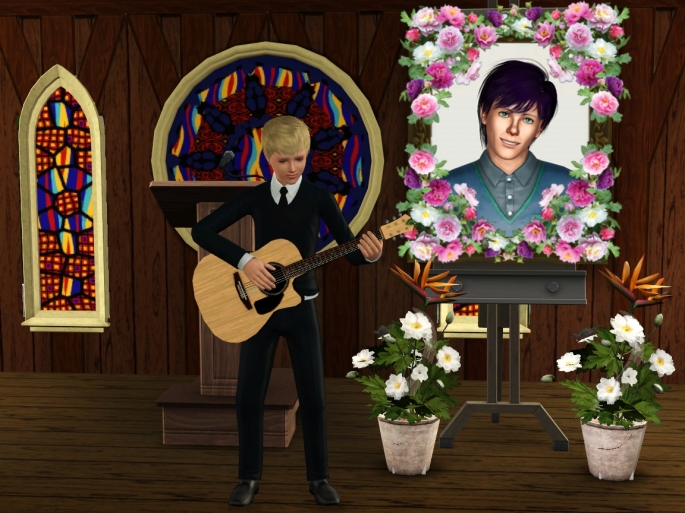 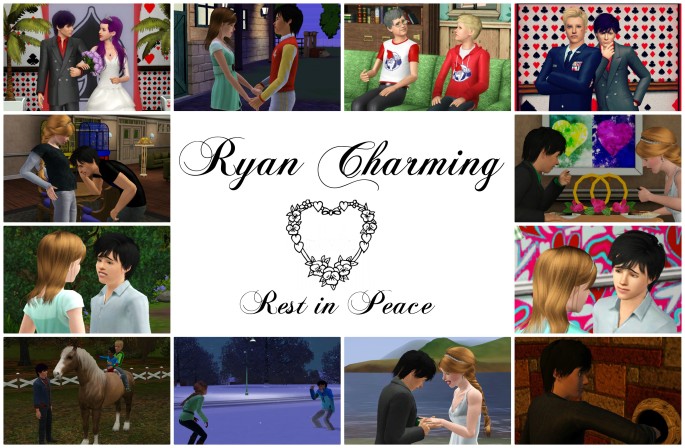 This was a tough chapter to write for two reasons. First off, the death of a sim is always hard. Unfortunately, Ryan didn’t have much of a story during the Cinderella Challenge, and he wasn’t around for most of Stella’s story. I hope that I did his character justice in this Generation told through how important he was to Lincoln. Ryan Charming was brave, kind, and protective of his family. He was the only son of Michael & Elizabeth Charming. Devoted husband to Cindy Rella Charming, loving father to Stella Charming, and proud grandfather to Autumn Charming, Willow Charming, and Lincoln Charming. He shall be missed.

If you were wondering about the songs that Lincoln performed in this chapter the first one was Ooh Child, by The Five Stairsteps. And the second song, the one Lincoln sang at the funeral, was He Walked on Water by Randy Travis. Which brings me to the second reason why this chapter was so hard to write.

My father-in-law recently passed. He was an amazing man. He treated me like the daughter that he never had. My husband and he had the type of relationship that most kids wish that they could have with their parents (it was the close relationship that ​I wish I could have with my mom). We played that same song at his funeral. Even typing the lyrics now brings tears to my eyes.

I’m sorry to blab on like this. This has become a longer note than I had originally planned. And now that I think about it I should have included a 3 tissue box warning at the beginning. But anyway, I will leave you with my usual “have a great day or night depending on when you are reading this”. But I would also encourage you to take some time today and tell someone how much they mean to you. Even if it the cashier at the grocery store (especially if it is a cashier, because those poor retail clerks get no love. I should know I used to be one of them). It will make that person’s day a little bit brighter, and it will make you smile as well. It is a Win/Win!!!