I can’t believe  how long it has been since I posted my last chapter.  But now that life is getting back to normal hopefully the chapters will be posted on a normal basis (fingers crossed)!

Lucifur has improved her hunting skill and caught a blue bird.  And of course I had to give him to Cindy.  Everyone, meet Skittles.

While the girls were in elementary school Missy got close to maxing out the sculpting skill.  Now that the girls are in high school, Missy needs a new skill.  I liked the inventing skill for her.  It is another way to harness her evilness to produce some humorous outcomes. She has already electrocuted herself twice. 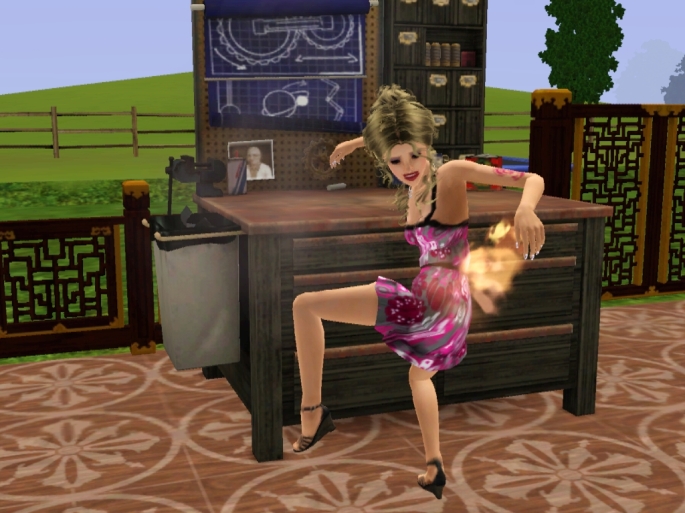 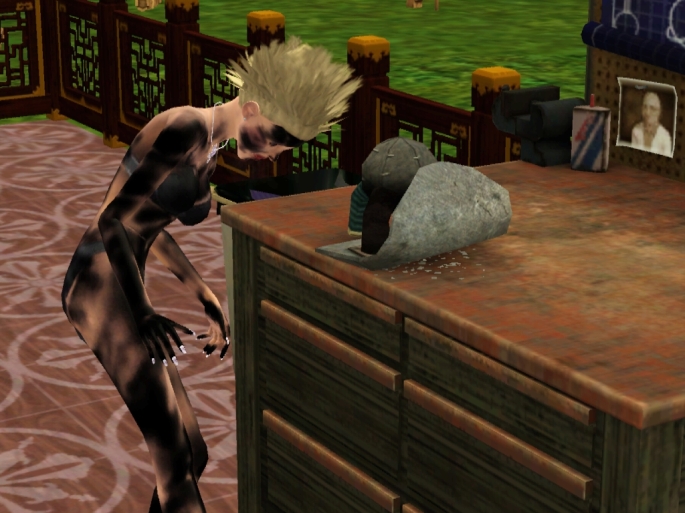 Speaking of high school, it is no surprise that Cindy is already on the honor roll.   She is enrolled in all advanced and honors classes.  Unfortunately, she still has no time at home to do anything but work for her evil stepfamily.  So, to maintain her high GPA and stay on the honor roll she spends her lunch period in the library finishing up her homework and studying for her upcoming tests.

Anastasis is not doing as well in school.  She’s not dumb, just lazy.  Her teachers think that she could be on the honor roll, if she only applied herself.  So they set her up with a tutor to help her pass her classes.  And she hit the tutor jackpot.  His name is Ryan Charming.  He is the most popular boy at school.  His dad is Leader of the Free World, and his mom is Chairman of the Riverview Gives Back Charity.  But Ryan is not just a spoiled rich kid.  He is Class President, Captain of the Polo Team, and future Valedictorian

“Ok, why don’t we start with your American History homework.” Ryan said as he took his place at the dinning table.

“I don’t think I’m taking that class.” Anastasis dug through her bag to find the notebook.  “Wait, is that the class with the boring old teacher who just rambles on about some stuff that happened a long time ago?”

“This is going to be a long night.” Ryan thought to himself.

Three long, torturous, aggravating hours later it was finally time for Ryan to go home.  “This was fun.” Anastasis said, but Ryan didn’t hear her. He was putting his books back into his backpack when something, out of the corner of his vision, caught his attention.  He looked up and saw a girl head out the front door.

Something inside his gut told him that he had to find out who she is.  And Ryan didn’t become President of the Equestrian Club by ignoring his gut instincts. 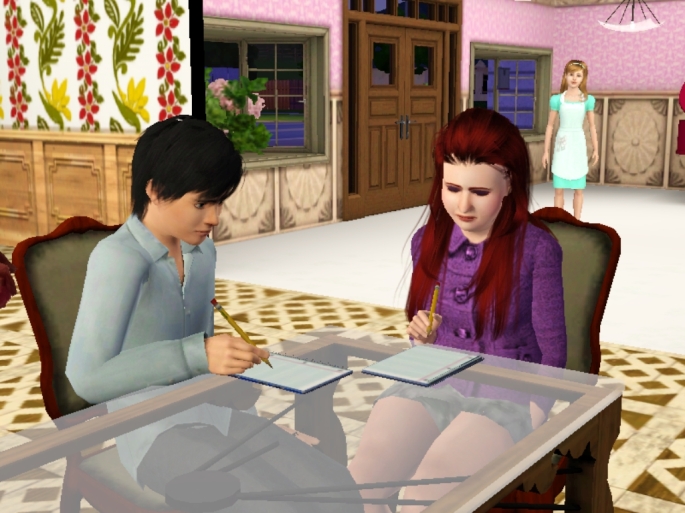 He said a quick goodbye to Anastasis and set out to find his mystery girl.  Lucky for Ryan, he didn’t have to look far.  Cindy was on the side of the house putting away the bags of trash.

“Hi there.” Ryan said as he approached her.

“Why are you talking to me?” Cindy questioned.  She didn’t mean to sound rude, but that’s how it came out.  Cindy wakes up early in the morning to make breakfast for her evil stepfamily, and the only time they talk to her is to order more juice.  Then she rides the bus to school, sitting by herself.  She pays attention in class, but never raises her hand to talk.  At lunch she is in the library studying and finishing up her homework.  Cindy was comfortable with being invisible.  Cindy was happy not being noticed.  Cindy wasn’t used to people talking to her.

Cindy could see the genuine smile on Ryan’s face.  She knew that she could trust him.  But she couldn’t shake the feeling that all of Riverview was watching. “Follow me.” Cindy said as the lead Ryan down to her basement.  As soon as Cindy shut the door she felt more at ease.

“Let’s try this again,” Cindy was finally able to smile.  “Hi, my name is Cindy” 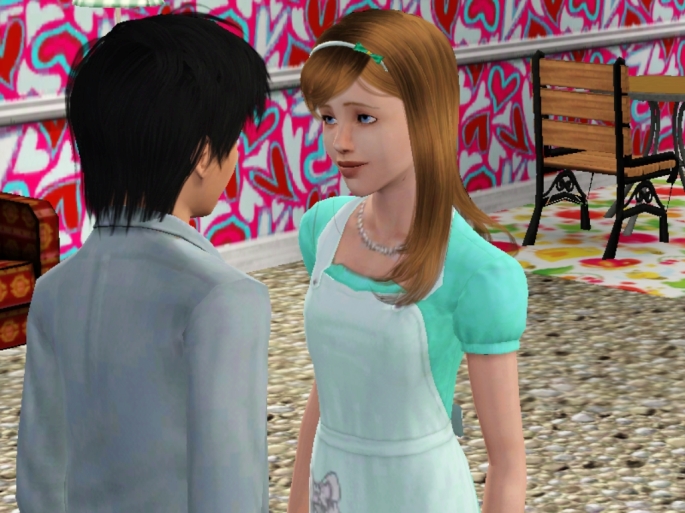 “I saw you in the house.” Ryan explained.  “and something told me to find out who you are.”

“I’m no one special.” Cindy blushed.  She was not used to such a compliment.

“Why haven’t…” Ryan wasn’t able to finish his question.  He was interrupted by Cindy’s cell phone.

“It’s my godmother, Fay.” Cindy explained.  “I have to take this call.”

“I don’t know why,” Ryan said as he made his way back up the stairs, “but I have to see you again.” 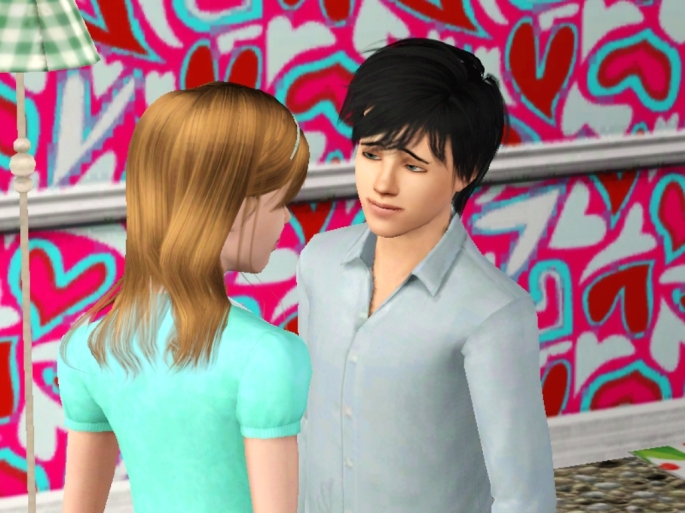 Ryan visited Cindy every night that week.  They talked about school, books, and how they shared a love of animals. “When I grow up I am going to be a world famous jockey.” Ryan told Cindy.

It wasn’t hard to see why Cindy was so smitten with Ryan.  He was kind, charismatic, and funny.  Cindy and Ryan were enjoying their time together so much that before they knew it, the week was over.   Friday is  Ryan’s last day to tutor Anastasis.  And the last day that Ryan would be able to visit Cindy without anyone being suspicious.

“I have to see you again.” Ryan said.

“How?” was Cindy’s response.  “Missy will know if you come over, and we can’t see each other at school. I guess this is goodbye.”

“I won’t accept that.” Ryan said as he grabbed Cindy’s hand.  “tomorrow is Saturday.  Missy and the girls will be gone.  So, we can hang out then.” 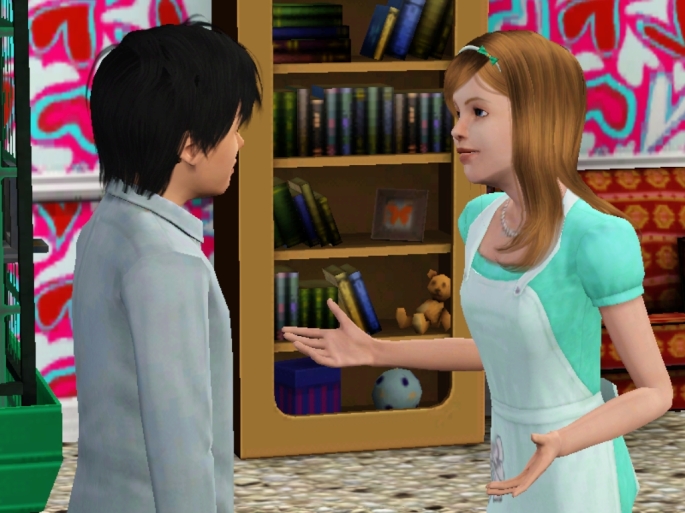 The next morning Cindy woke up extra early, ready to finish her chores and get the Evils out of the house.  And she didn’t care that Missy and Anastasis complained that the fruit in the fruit parfait wasn’t fresh enough.  When she was outside, and away from any prying ears, she called Fay.

“Today is the day.” Fay cheered.  “what are you going to wear on your date?”

“I don’t know.” Cindy looked down at what she was wearing.  It is the same dress and apron that she always wears.  It’s the only thing that she owns.

“Meet me at the Riverview Beauty Salon.” Fay exclaimed.

“I don’t know about this.” Cindy said as she stood upon the platform looking at herself in the salon mirror.

She was not used to change.  From the moment her father died Cindy’s life has been a constant routine of school, chores, sleep, and so on.  Anything outside of that made Cindy nervous.

“Nothing gives you more confidence than a new outfit.” Fay smiled.

“Are you excited about your date?” Fay asked as she handed Cindy a shirt to try on.

“This is all too much.” Cindy, feeling overwhelmed, confessed from inside the dressing room.

One hour, and one hundred articles of clothing later, they had found the perfect outfit.

“I still don’t know about all of this.” Cindy repeated.  “What is someone sees us?  What if Missy or Anastasis were walking through the park and happen to find me sitting with Ryan Charming?  They would make my life even worse than it already is.”

Cindy was starting to panic.  Until this point she had never thought about what going on a date with Ryan Charming actually meant.  Ryan is the most popular boy in school.  Every girl wants to be with him, including Anastasis.  But Anastasis has become obsessed with Ryan.  Cindy found a picture of him under Anastasis’s pillow.  And she even heard a rumor that Anastasis sent a girl to the school nurse after she saw Ryan hold the cafeteria door open for her.  If Anastasis could beat up a girl for walking through a door, just imagine what she would do to Cindy for going on a date with him.  Cindy’s face turned whiter than a sheet.  Her heart jumped to her throat and she started to hyperventilate.

“Sometimes you just have to just grab the bull by the horns.” Fay saw that her goddaughter was starting to loose it.  “seize the moment, and carpe diem”

“Thanks for the pep talk.” Cindy could still be sarcastic in the midst of her nervous breakdown.  “but next time, skip the cheesy clichés.”

“Cindy, you are smart, and pretty, and fun to be around.” Fay looked Cindy right in the eyes to show that she was serious.  “You have your mother’s good looks and you father’s sense of humor.  Ryan better thank his lucky stars that you want to go out with him.”

Cindy broke Fay’s gaze and caught a glimpse of herself in the mirror.  She saw her new outfit and how good she looked.  But more than that she saw her godmother holding her tightly by the shoulders.  She couldn’t remember the last time, if ever, she had been held so tightly.  She felt safe, knowing that Fay was right.  And the panic slowly started to fade. 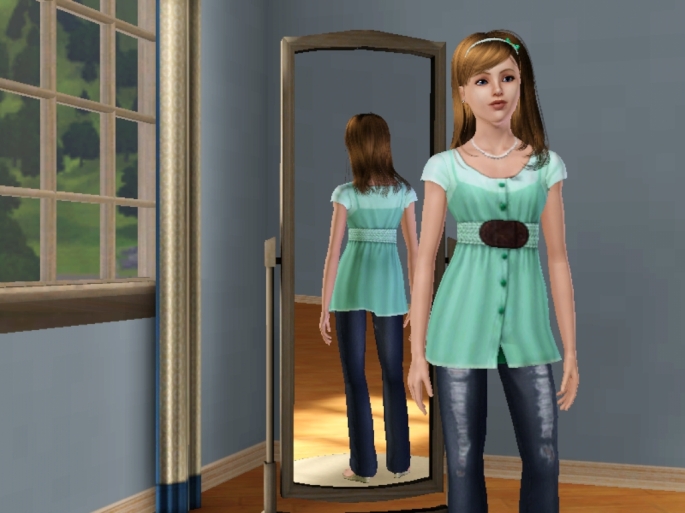 “You look really pretty.” Ryan commented as he met Cindy at the park. Cindy picked a secluded area of the park and Ryan set down the blanket.  Any panic that Cindy had left evaporated when she saw Ryan smile.